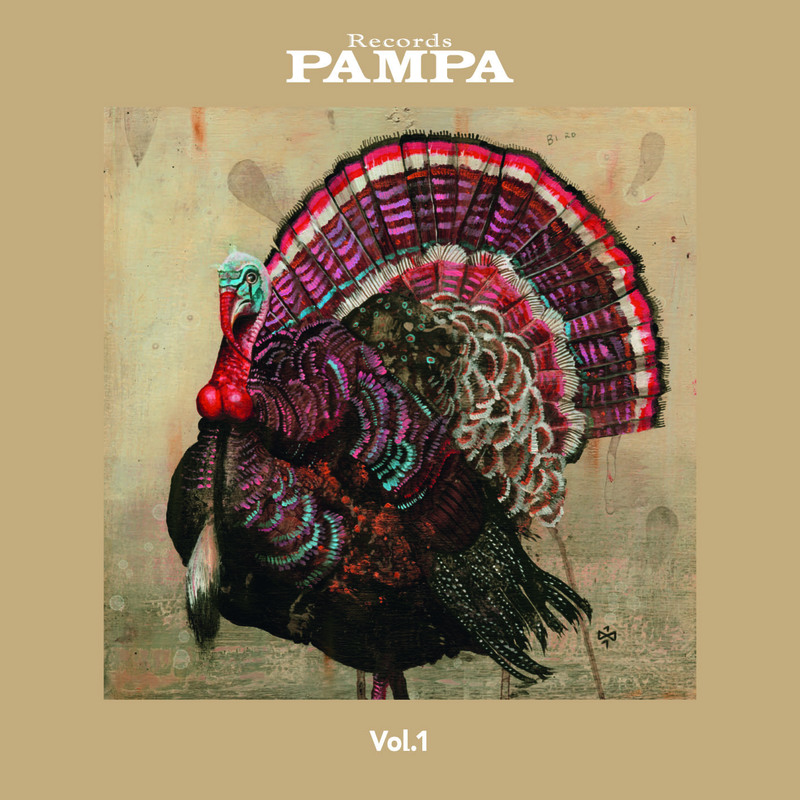 We are touched to finally present you Pampa Vol. 1

When we decided to go for a label compilation our main goal was:

Every single song has to be a star!

Almost 2 years we kept chasing and squeezing the best out of our good friends and admired artists until we now finally got what we dreamed of in the beginning:

A Firmament of Stars.

We kindly asked the stars behind the stars to write a litte quote on their work:

Matthew:"I loved the original track and one day i was in a hotel room in italy and took an mp3 of the finished track and tried to chop it in to shape before a gig. i don't normally do this kind of thing, so feel a bit awkward about the whole affair. "

Kosi: „ As i listened to these beauty i felt the deep wish to made a version for the club in a decent and humble way. just adding a beat and stretching the arrangement to 10 minutes.

Only god knows how the significant snaerdrum of my favorite Mood 2 Swing Classics made it into my version.

Michaela : "There was this organ-melody I had in mind but after a while I got stuck...then Dj Koze joined in and suggested to add a beat, so I followed his advice and snatched one from Die Vögel."

Axel Boman  - In the Dust of the Planet

Axel: „In my recent music the end part of my songs is getting longer and longer. more than half the song is an extended ending. i aim to stretch that end until the beginning is completely erased and the end becomes the beginning. a metaphor for life, aging and my fear of dying. i think this song is an important step towards this new start."

Nasrawi - Bump with you

Nasrawi :"Bump with You was a part of a full album that I thougt could be Pampa style, so I played it for Kosi while driving us around Dubai all weekend, not saying a thing about who the music was made by. Then on the way to the airport he finally wanted to know what the hell this Track is and boom, a new Pampa track was born, fresh like a Barsha Falafel !

Fakesch:“'I Does It' is the goodest statement in hip hop history...period!

It throws us back to the future: late 70ies Funk, early 90ies HipHop, 2016 Electronic...it proves why Funkstörung got the Funk!

Michel: “Pacemaker happened at the end of an all-nite-jam, catching that moment of fatigue harmony and overdoze…“

Pete: “ Travelling by night can be the xmost inspiring thing in a djs life- a journey between complete emptiness and wonderful insanity. Almost connected to utopia one seaks for the brilliance. Producing a piece of music prior a night out at the club is the guide through nowhereness- sometimes it glows in the dark…!"

Jimmy: "We bought snowshoes a couple years ago but never ended up in any snow, so a year later I returned them, unused. I thought about them a lot, though, and this song reminded me of them."

Josef: „ i originally tried to make a song like Unicorn kids´s „pure Space“ . longing and youthful and with that kind of synthesizer but in the end this little song came out…"

Michel: " Un prince " is the first almost finished track I produced for my forthcoming album.harmonies and arrangement appeared very fast.

Mense : “ We had a kind of British 2-Step beat with some clarinet-melodies and got stuck.

Then DJ Koze joined in and suggested to get rid of the beat. That was a wise decision.

Sophia Kennedy sang the lyrics which begin melancholic and end sanguine and the music does the exact opposite. And that's that."

Kai: “The track Bells_5 came together just after I had broken up with my girlfriend and was homeless, sleeping in the studio in Bermondsey, South London. I used acoustic foam to make a bed and turned the guitar amps on at night for heating. Love the hi-hat sound in this one. "

Martin : “ a tiny spinet chord progession, a low analogue tanzbär woouap, a pinch of ritalin and fresh mountain air are the ingredrients for my trick no17"

Rajko “I wrote this song during a transitional period in my life for my cat. It is inspired by an Apache Native American custom. When someone is really sick, a medicine man performs a very sacred ceremony where they chant to the ill individual."

Jamie: "This song is an ode to London's orbital motorway, the M25. i was thinking about a Family who was so isolated, so removed from society, that they would just go and spend the end of their days in a car. The cooperation with Kosi has nothing to do with it"

Derwin Digger "This track started out as a remix for a group called Voices of Black who released some 12"s on Wolf&lamb and my Notown label. They are currently on hiatus. The original sketch became this little jam I made in hope that one day they'll work together again.“

Martin:: "Recently my friend Adrina gave me a little white tissue with the following words printed on:  "Manifest with precision“

Every time I read it , I think about Nana and how precisely she manifested in this piece (of music), the moment she left our world but not. "

Roman: “ When I started to work on '9Years‘ I was thinking of a particular beautiful and on going relationship and how precious friendship is in general.

One day I suggested the track to Kosi and he felt it immediately. His club version which he sent to me completely out of the blue somehow emphasized my originally feelings.“

Axel Boman - In The Dust Of This Planet

Nasrawi - Bump With You

Funkstörung feat. Sensational - I Does It