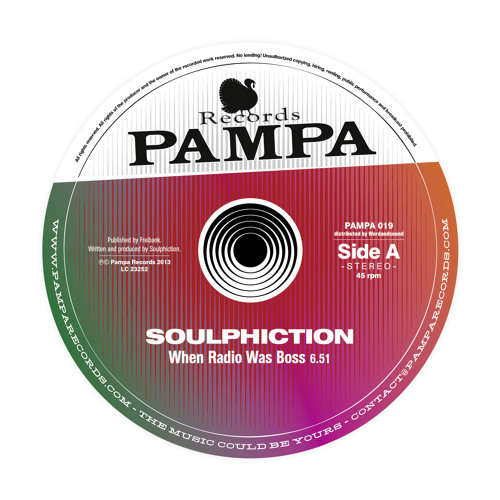 PAMPA019 - When Radio was Boss

The Artist Concurrently Known As Jackmate has been already been indoctrinated into our cult since he signed onto he Pampa bookings roster awhile back. As SoulPhiction he is also co-founder of Philpot, the Stuttgart-based label, home to the majority of his releases over the past 10+ years. Anyway, we get the privilege of stamping the Turkey logo on SoulPhiction's first proper release of 2013, following his remixes for Murat Tepeli and Detroit Swindle. 'When Radio Was Boss' is a tribute to those magical electromagnetic waves that ruled yesteryear. With that prototypical Pampa percussion-rattling and clanking its way into the room-and a warm, round bassline bounce combined with some symphonic froth in the atmosphere, this track definitely demands airplay. On the dancefloor, at least! (And right in the middle of the track, catch the pleasantly jarring shout-out from WBAU, the call sign of the defunct New York radio station that counted members of Public Enemy and hosts of Yo! MTV Raps amongst its staff.) On the flip, the bpm gets cranked down just a bit for 'Maybachswagger"-If the A-side is a tribute to radio, the B has roller-skating on its mind. Starting out spooky with a sampled voice cooing over a slightly detuned bassline, the surprise comes in the final third, when a kawaii disco vibe drops in, seducing you onto the rink for a few laid-back laps.

When Radio Was Boss