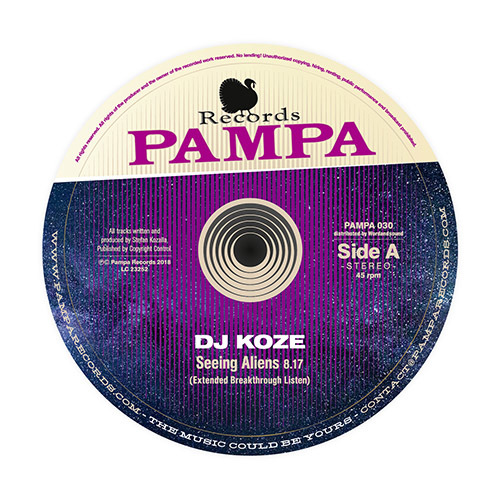 DJ Koze exists both above and beyond club culture as we know it – his albums and remixes flying free from genre and trend – and symbiotically woven into its heart. Yes, he always abstracts and weirds out the principles of house, techno, hip hop, pop, psychedelia, exotica and so forth, but he does that because he understands them. And when it comes to club-demolishing tracks, he understands those principles as well as just about anybody on earth.

Thus he could create an enduring club tune like 2015's “XTC” that is strange, contemplative, even disturbing, bore little relation to anything around at the time, yet still got bodies moving and sweating better than way more obvious techno bangers. And thus the knock knock album, which melts a million genres and none into one another, can comfortably include “Seeing Aliens”.

“Seeing Aliens” unquestionably is a banger, its bass riff snaking around your body like a python, its high-drama strings, pianos and outbursts of noise designed for maximum crowd pressure release. But, again, it sounds like nothing else, and its dynamics and twists unfold over eight and a half minutes in ways that will mess with your head every time no matter how many times you hear it.

The exclusive b-side track, “Nein König Nein” (“No King No”!), meanwhile, is slightly gentler on the face of it: it's less about sonic pressure, more about hip-shaking syncopation. But it too tells strange fairytales in its peculiar and brain-tweaking accumulation of detail, and though you'll hear archetypal sounds from the heart of house and disco in it, every last one of them becomes new and otherworldly.