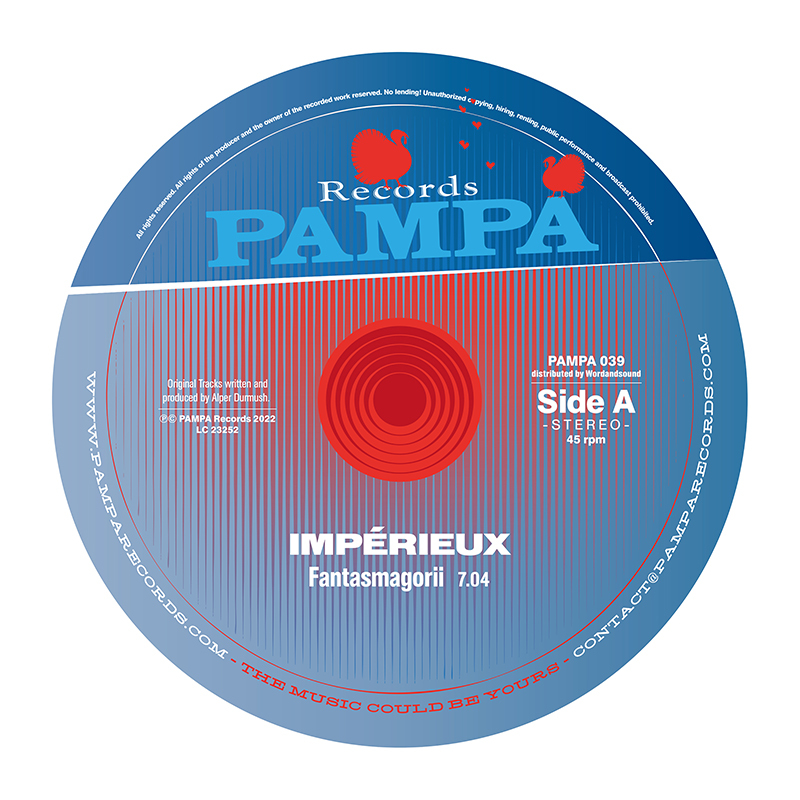 BUY/LISTEN/STREAM: HERE
Release 12" Vinyl: 25th November 2022
PRE-ORDER VINYL: VINYL ORDERS WILL BE SHIPPED SHORTLY BEFORE RELEASE DAY 25 November (if other items are also ordered, everything will be shipped together)

The illusive Impérieux ventures into the fantastical world of DJ Koze’s Pampa with three tracks of masterful, genre-bending electronica.

It’s little wonder that the Turkish/Bulgarian native finds himself coming into the orbit of the Hamburg-based label head. DJ Koze has been a long-time supporter of Impérieux’s music, his intrepid DJ sets often finding their most dramatic peaks or existential lows with one of the producer's audacious dancefloor soundscapes.

Now Berlin-based, Impérieux’s music draws deeply on the sounds of his heritage, taking inspirations from Bulgarian folklore, twisted and chopped Turkish dialect as well the gritty underground of his new surroundings.

With Fantasmagorii, Impérieux explores his sonic boundaries with techniques inspired by the label-head himself. As a producer he is becoming known for his ability to build fantasy worlds through aural experimentation, creating productions soaked with fragility and emotion. His music brings a full-body listening experience of it’s own, laden with intensity and mystery, and full of opposites. He has the ability to pluck their listeners out of reality, to bend the rules of time and space and defy genres in a way that is reminiscent of Koze’s various bodies of work, and it’s no surprise that this selection of tracks feels right at home in the Pampa fantasy.

"I´m permanently seeking for Music that blows my mind. It’s like digging for gold. Impérieux delivers for Pampa a psychedelic bullion" (DJ Koze)