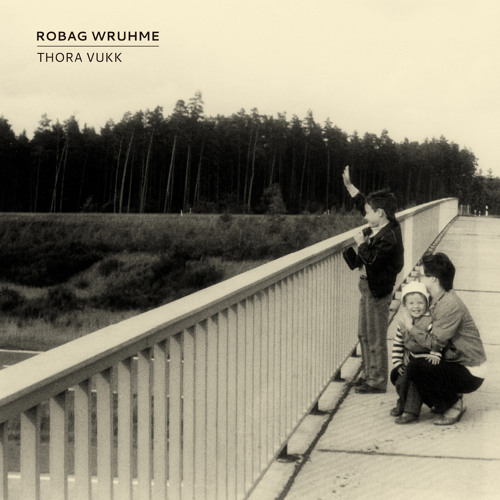 You don't know what to expect with the pampas. There are no guideposts, because there is nowhere to direct to. In fact, you trust your inspiration, which you find in the blowing of the wind and the scratching of the gobbler. It's an attitude like this, that is used by the label maker DJ Koze and Pampa acts like Jackmate and Isolée to make their contact with House music. It's an encounter with an open end. When musical clichés are forgotten, they look at the music with children's eyes.

In January Gabor Schablitzki released his first track for Pampa under his majestic and well known alias Robag Wruhme. Koze knew that behind "Thora Vukk" was way more than what met the eye. Schablizki remembers: "Stefan (Kozalla) told me : If you're in the flow right now, then produce an album! So I did, which took me half a year. During this time I worked a lot with piano Rhodes and field recordings. Stefan recognized this phase and plowed me a way to create an album. "Wupp Dek" was done right after "Thora Vukk“ : A rhythmic clangor touched by a smooth pad Schablitzki's voice sings in a promising way : "Like it, like it, like it". Again and again you wait for the grooves and the track makes you stay there full of expectations. "It's a classic opener, it takes forever 'til the bass drum hits. But once it's there, it's really there and doesn't leave that soon. The whole album is found on that track!" Then the rousing grooves and seductive sounds fade away to leave room for something else, something unexpected : Water runs, echo sounds draw a picture of a vast, cold room. Within seconds a pressuring atmosphere evolves that wakes one's curiosity on a whole different level. That cut, that canyon is the silver lining through the whole album.

The club tracks are separated from each other by six eerie sometimes disturbing "bridges" (Brücke in German). Thora Vukk unites two streams, one bright and one dark, twisted in each other, which cannot be more conflictive, but depend on each others existence. It’s the dark gloominess of those soundscapes that make the clubby melodic tracks shine. After the first bridge, the clanking glasses of the album version of "Thora Vukk" sound as if they were sung with the tongues of angels. Where the percussions of the 12"-Edit spread the party vibe, the album version is enchanting with grace. "Bommsen Böff" with its unexpected break sounds like a postcard out of sound from a past era. Schabliztki explains: "Those three tracks brought the album to life." After those were done, the creative Eros took possession of him. "I can't really tell anything about "Pnom Gobal" I was already in the flow when I made that one. In that phase I am unable to interact with the "outside world“ and later I can't recreate what happened with myself. One's for sure, I like the track! It sounds so dry. Then there is the deep bass drum. I sang the vocals right into my laptop after a hard week-end with a hint of alcohol left on my vocal chords." The first three tracks are body music. The gracefully built grooves communicate with every single fibre of your muscles. They pull on your extremities like on the strings of marionette. With „Pnom Global“ the album enters your soul: Adorable strings create an absorbing meanwhile unseizable Pop moment.

"Tulpa Ovi" is the only track that was not created during last years’ sessions. It is a remainder from 2004/2005 and was supposed to be part of the Wighnomy Brothers album. The blue prints of the unreleased album were rumbling around in Schablitzki since then. Now it's getting realized: In contrast to Robag Wruhme's first album, the new one was set to be "more grounded and filled with melodies and self recorded samples- ideal for the bedroom or passenger cabins of any kind." Schablitzki created a huge library of sounds like slamming drawers or mid-summer rain recorded in his friends' spacious kitchen. Those field recordings are no secondary accessories. By setting them into a rhythmic shape they dominate the structure of the tracks. Due to the constant variation the fan of the grooves is opening up every time in a new manner. The rattling sound of dishes in "Prognosen Bomm" is easy to identify, the filtered and transposed starting-click of a neonlight is hard to recognize as such. With the breathtaking hook lines of the second triptych Schablitzki is drawing a wonderful Pop fresco. One is still stunned and Thora Vukk is already at the end. That's the name of the last track - Schablitzki: "Ende" was giving me headaches, I told Stefan three times: I can't get it done, but he constantly responded : Stay with it. The idea is good." Schablitzki asked friends and long time companions to sing a short vocal phrase so he could assemble that into a choir: "Of course only a few amongst them are singers, so it was really hard to mix it down to a whole chorus - but the result is absolutely astonishing, it's my favorite track of the album." The charm of the choir is lying in its fragility. "Ende" is a whispered, enchanting good-bye - a lullaby you still hear, when you are already dreaming.