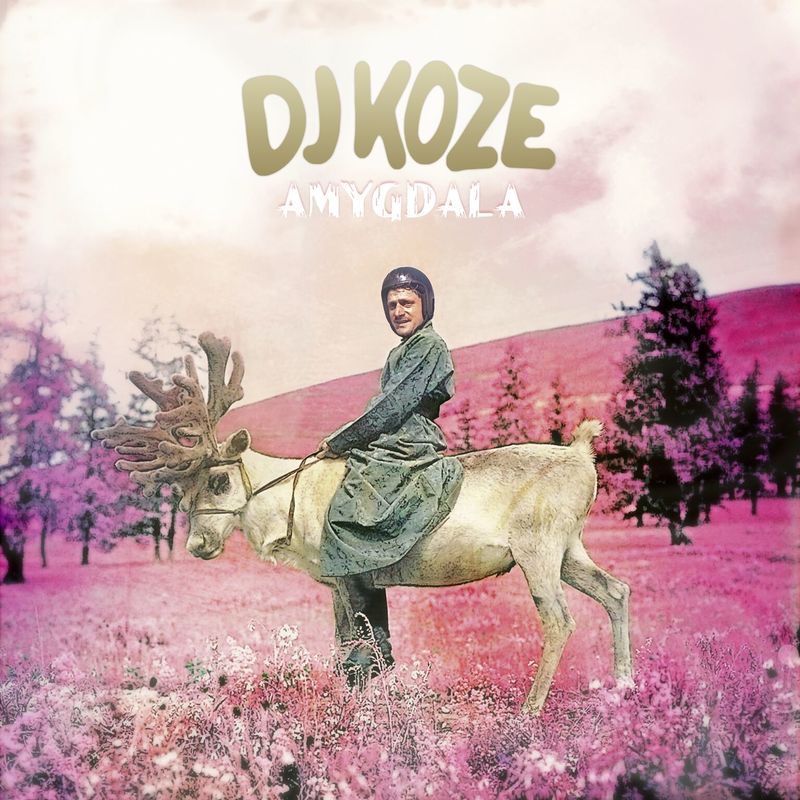 „Amygdala“ is Koze’s Sgt. Pepper. It’s an unreal 78-minute walk through Koze’s mind, complete with moods, intensities, sounds and scenes as yet unheard of. It feels more like a double album, urging you to turn over and change the records time and time again. "Amygdala" amazes by its sheer musicality, deepness, and its  ethereal sound design; it’s a kaleidoscope of a great variety of soundscapes where you keep discovering new nuances even after listening to it a thousand times. Nobody else could unite artists like Caribou and Dirk von Lotzow, Hildegard Knef and Mathew Dear, Ada and Milosh in such an organic way and on one and the same record as Koze did. There’s never been anything like it.

He weaves new garments around the a capella parts of his guests, garments that only he can tailor, and that’s how the album, for all the diversity of its artists, sounds consistently homogeneous and in the true style of Kosi Kos. It’s all about “the courage to dare”, about letting voices resonate undisguised in all their authentic peculiarity.  About creating  truthfulness.

How much can you cut out, when does the flame die down? On the other hand, under which circumstances could it even burn for ever?

The album, which in large parts has been composed in a Spanish fishing village, starts off with Balinese gamelan sounds from which a relaxed discoid bass peels off, caressed by mystic backwards basslines, balafon resonances and slide guitar chords. You can hear the ceaseless chirping, twittering and cheeping from all the treetops of Koze's exotic jungle.

High on the odour of the shaman’s Copal like Snoop, „Track ID Anyone“ is hacking its way through the lush foilage until, out of a sudden, the soft voice of Caribou resounds.

"Die Vögel" wave to us from the branch just opposite and orchestrate Dan Snaith's singing accompanied by smooth horns. Welcome to the jungle!

Koze and his dude Apparat share their common grouchy and misanthropic nature. Both of them like to go on holidays on their own and are either perpetually nagging or sentimentally slobbering over something. There’s nothing in between.

In "Nices Wölkchen", Koze presents Apparat’s vocals (which the singer himself naturally thought were crap, thus plastering them with effects) in an unusually dry and frail manner.

The song morphs melancholically through the patterns until it completely mutates to a quivering cloud that eventually empties itself over you with a thousand tears, just like a rain of champaign.

The soulful organ of the house music hymn „Royal Ascher Cut“, staging rhythmically unexpected chord changes and insane African flutes, generates a desire for dark clubs, women and drugs, and follows the principle of the maximisation of emotion by a minimisation of sounds.

This track refers to the Spanish court jeweller Asscher, who has been polishing the Crown’s gems in the „Royal Asscher Cut“ for generations. Koze had the unique opportunity to get to know his daughter Carol Asscher in G'stad. Her impressive holiday accommodation, which is situated there, its entirely built of oak flambé, imported from Burgundy.

In his song „Magical Boy“, Koze is savouring Matthew Dear’s heavy baritone: Unlike Dear’s own production, where he usually embeds his voice in a humming sound carpet, Koze virtually exposes his zappa-esque vocals on a silver tray and strips the music down to the billowing Rhodes. The primal scream-like „Ahhhhhhh“, which is the most prominent part of the refrain, sounds like the war cry of a lovesick mandrill. Out of a sudden – while „Magical Boy“s spacy metallic outro still reverberates in a majestic fashion – the galley is slowing down its pace and floating through the driftwood with „Das Wort“. Alas, on the far side of the bank you can see Dirk von Lutzow slowly waving at us in the evening sun, singing of love like nobody else can do, accompanied by dry, soulful beats with soundscapes of Hawaiian style.  The greates poet of our generation, nobody has ever heard him like that before. A turning-point of the album!

In the case of Homesick, a Kings Of Convenience track with a kind of Simon-&-Garfunkel charme to it, Ada’s voice and interpretation lend it the soul and depth of a Soul II Soul track. Slow and low - that's the tempo. The shit bounces dryly and with a tight bass line around Ada’s exceptional vocals until, quite unexpectedly, perhaps the most defensive percussion solo of all times sets in.

“La Duquesa”, the most tender and most refined piece of the album, perfectly casual and serious, deep and euphoric, all at the same time, is dedicated to the Spanish Duquesa de Alba, who, as holder of 46 titles of nobility, is even more highly decorated than Queen Elisabeth. Koze is fascinated by this lady: With her peculiarly creepy appearance she seems like a relic from the past era of the Spanish nobility. She is the most pictured woman in Spain and a pop phenomenon. When, in 2011, she married a man 24 years younger than herself, the entire country badmouthed her. Sometimes Koze would love to be that younger man, who the Spaniards dismiss as a legacy hunter!

„Marilyn Whirlwind“ is the loudest track on the album. The singer of St. Georg seems to be back in biz and he thoroughly sweeps through the digs at Half-Time. Emerging from a digital error, simple, bouncy and funky, this is just what it has to be like sometimes. This brain saw was produced within 2 hours. A good sign.

In „My Plans“, the New York fugitive Matthew Dear makes his appearance on deck for the second time. Nervous, frenetic sounds carve out the soul in his voice. A dirty slow beat, consisting of no more than a kick & clap, African-sounding refrains, vocoder sparks, broken drop-outs: this is great future funk!!

„Don’t Lose My Mind“ offers a lot of space between every single rimshot. Never more than two intertwined samples that, in spite or maybe even because of their emptiness, diffuse a warm bliss. You’re instantly craving a pint.

Milosh, who lives in L.A. and is originally from Canada, is known and treasured for his androgynous voice. "Amygdala", the title song, is a wondrously satisfying metamorphosis of joyful chords and mbira sounds. It is perhaps the most beautiful, most gentle song of the album. When played out loud at darkness, it shines brightly and with its spirituality, it is able to heal entire nations. At least that’s what they say...

Hildegard Knef is, in Koze’s opinion, the most authentic singer that Germany ever had. Unheard-of lyrics, pain, courage, humour, darkness, deepness -  that woman had it all. 11 years after Koze’s legendary remix of Hilde's "Ich liebe Euch", he came across the tracks of several songs that he had at his disposal then, and in one single night and with the help of a bottle of the Spanish red wine Espelt, he created this new version of "Ich schreib dir ein Buch". The samples that caress Hilde’s voice are all taken from the original tracks and have been recorded with frantic enthusiasm during the kick-in phase of the wine. And you can definitely tell: out of time for the most part. After critical review on the morning after, it’s been judged just right. Hilde and quantification, some things just don’t go together!

For „NooOoo“, the good-bye track, Koze has recorded Tomerle & Maiko. Two very nice guys that he picked up as hitchhikers in Mexico and that he’s grown to like a lot. Tomerle is originally from Israel and works as a Yoga teacher, Maiko is Japanese and very microphone-shy. It took Koze almost a whole year of constant persuading to wrench four lines of Hebrew vocals from her. A sweet lullaby for all the blessed nomads.